Jon Favreau, the last two Iron Man director, and Robert Downey Jr., that plays the hero, declared that they drew their inspiration from the businessman originally from South-Africa : “When I was trying to bring the character of genius billionaire Tony Stark to the big screen in Iron Man, I had no idea how to make him seem real. Robert Downey Jr. said, ‘We need to sit down with Elon Musk.’ … Downey was right. Elon is a paragon of enthusiasm, good humor and curiosity — a Renaissance man in an era that needs them” Jon Favreau stated.

So what are the common features between the leader of the Avengers and the one behind Paypal and Tesla ?

Just as the fictional character, Elon Musk is a visionary when it deals with technology and clean energy. Head of 7 companies (that’s right), Elon Musk is continually trying to realize his projects for his vision of a better world.

SpaceX : company specialized in aeronautics and space flights. It designs new development and engineering technologies to reduce space costs, ameliorate the space access reliability and develop a heavy transportation system. In February 2018, SpaceX has launched a Tesla Roadster into orbit.

Tesla : a 100% electric top of the range and sport car manufacturer. Today, Tesla is also specialized in energy storage devices : Powerwall for private individual and Powerpack for professionals.

The Boring Company : an electric tunnels boring company on a 3D model to avoid traffic in big cities.

Neuralink : a nano-biotechnology startup to extend the memory or to manage terminals.

SolarCity : 1stcompany in the USA that make, finance and install photovoltaic solar panels.

Hyperloop : this project, launched by Elon Musk, consists in developing lifted tunnels under low pressure in which capsules move at an incredible speed and carry travelers and goods. For the Hyperloop development, Elon Musk has opted for an open source and collaborative model, this is why no patent has been filed. Today, several companies work on this project.

Tony Stark, as for him, is head of a fictional firm named Stark Industries.

According to the magazine GQ, Tony Stark’s fictional fortune reach around $12,2 billion, which is less than Elon’s, real fortune that is around $20,9 billion. He manages to make his money yield a profit thanks to his several companies but also by old ones he already sold :

Zip2 : software that helps medias, newspapers in particular, develop themselves on the web. This program has contributed to the success of the New York Timeson the internet. In 1999, Elon and his brother Kimbal Musk, sold it to Compaq Computer for $307 million.

X.com, now Paypal : in 1999, Elon Musk creates X.com, a startup that offers bank services online. Then, X.com merged with another startup, Confinity, specialized in payments and cryptography. This merger gave birth to Paypal and was bought by eBay in 2002, for $1.5 billion.

In January 2018, Elon Musk has announced that he will pay his salary depending on his company performance.

By transforming himself into Iron Man, Tony Stark becomes an international hero by saving Humanity from “villains”. As for Elon Musk, he may not have an armor allowing him to fly and fight like Iron Man, but he won’t stop trying to preserve humankind from its own dangers on Earth. Thanks to Tesla 100% electric cars, Tesla energy domestic batteries storage, the Boring Company, and SolarCity, Elon Musk wants to facilitate and accelerate clean energy’s transition.

Elon Musk and Tony Stark are both technology and astronomy enthusiasts : they both have a degree in physics.

Elon Musk is as provocative as Tony Stark. He launched in the early 2018, a Tesla Roadster into orbit with a model on board and even with the music radio on.

Every ideas that comes into Elon Musk’s mind, he implements it : annoyed being stuck in traffic in Los Angeles, he created the Boring Company (company that made and sold 20 000 “Not a flamethrower”, named in this way to foil the law).

Two years before Tony Stark say in front of dozens of stupefy journalists his famous “I am Iron Man”, Elon had already surprised the press in 2006 by announcing in front of the whole space industry: “Hello everyone, I am Elon Musk. And in 5 years you’ll all be dead.” 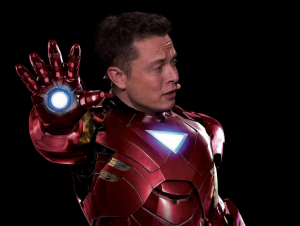 Elon Musk’s character traits are evidently a source of inspiration for Marvel, in 2002, he even has been invited to play opposite Robert Downey Jr. on set of Iron Man 2.

The only difference between both is that Tony Stark flights in a hyper high-tech armor whereas Elon Musk still ride in his super-fast, electric Tesla cars.